It’s close to midnight and I’ve just spent the past half hour or so watching the baby, Zach play. That doesn’t sound like something too terribly abnormal or something to even write about, and normally I wouldn’t even bother. But tonight, it is. Tonight (though I’d really like to be in bed), is something I am thankful to see.

Eric had the day off on Friday (Veteran’s Day), so we decided to take advantage of it and go to a movie. 5 of the kids were in school, my friend took Jace and we just had Zach. We timed the movie pretty well to match up with Zach’s nap schedule and he didn’t disappoint and slept through the whole thing. During the movie I could tell that I wasn’t feeling well and it felt very much like the flu was coming on. After the movie, I held Zach for a minute and thought he felt kind of warm. Eric didn’t think he felt warm, but did think he may not feel the greatest. In my head I chalked it up to issues with teething and left it at that.

Because I still wasn’t feeling great, when we got home I went straight to bed. I couldn’t fall asleep, but was resting. Eric decided he was going to go run an errand and took some of the kids with him. He had Zach lie down next to me and before too long he was out. Because the only kids left at home are old enough to fend for themselves, I tried to fall asleep again. But before I did I made sure to take a ‘selfie’ for no reason, other than to have it. One day I can show my grown boys that they used to love their mother. 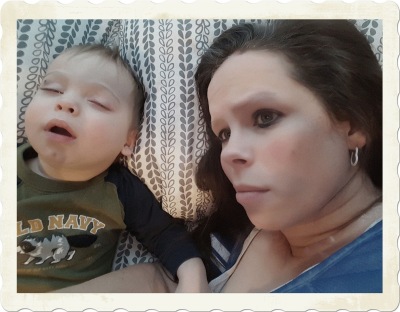 After a short nap, I woke up and was on fire. Zach was quite warm. We still just figured he was feeling a bit under the weather, and gave him ibruprofen to help with the fever.

By Saturday he had a small little cough, and was acting like he didn’t feel real well, but he still had his moments of wanting to play and the medicine was keeping the fever down. By the time he went to bed Saturday night I had noticed his cough didn’t sound very fun.

I had decided last night that I wouldn’t make it to church today. I’d stay home with Zach and I’d send Eric and the kids to church. It was our Primary Program and though I was super sad to miss it, I knew the little kids should be there to participate and Eric should at least be there to keep our class (9 year olds) in control.

Then this morning came around. All weekend I’ve been dealing with some sort of something. It thankfully isn’t the flu, but something just isn’t right. So I woke up and knew that there was no way I was going to church. I had been tossing the idea of just going to Sacrament, then coming home and trading places with Eric or something – but I knew I wasn’t going to feel well enough to go.

Then Zach woke up and EVERYTHING changed. As soon as he woke up we knew he’d need to see a dr. He sounded awful. His cough was super barky and his breathing was a bit raspy and labored. After he had his bottle, we also noticed that he was super lethargic. He almost fell right back to sleep. We got ready to go and I made sure to let someone know we wouldn’t be at church today and I felt awful for doing it on Primary Program Sunday. But, my baby was my first priority.

We got to Instacare and found that Sunday’s are fairly busy days. It took like 5 minutes to even get signed in. Then we probably waited another 10 or 15 in the waiting room and then we were taken back to a room.

The nurse got Zach’s weight and then his temp. It was around 101. She then had to get a read on his oxygen level. This required something being wrapped around Zach’s foot and he didn’t like that. Or maybe it was just that he wasn’t being held at the time. Ailey had come with us and didn’t much like having the thing wrapped around her brother’s foot either. I think she was concerned it meant something was really wrong with him. Bless her heart. Thankfully his oxygen level was at 96 or 97. I was thankful for that. After she got the info of how long things had been happening and all of that, she left. 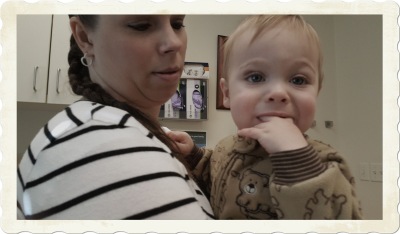 The doctor came in about 5 minutes later. He could tell Zach wasn’t feeling well and wend to work on his exam. He checked his lungs, made sure to check his ears – both of which looked good. His throat looked just a bit red, but he didn’t seem too concerned about that. I was worried we wouldn’t get a good cough out of Zach while the doctor was in the room, but Zach made sure the doctor heard what he needed to hear. The doctor pretty much only said, “Yup, that’s croup.”

Which is a mixed ‘blessing’. It’s viral, which means antibiotics won’t do anything, and it’s also something you really just have to wait out. There are things to help it, but it’s really a waiting game type of ailment.

The doctor said there was a steroid they’d give him there to help open the lungs and stuff, but other than that, it’s a game of switching ibruprofen with tylenol. And all that helps is the fever. Being that Zach is baby #7, we also know a few things that help.

We made a quick trip to Walmart to grab the baby ibruprofen cause we only had tylenol. We then headed home and Zach was ready for a nap. Sadly it only lasted about an hour because some of his siblings were being a bit too loud.

So we had a sick, overtired, uncomfortable baby for a few hours. He finally took another nap, but that started around 5. Eric had made plans to have the Elder’s Quorum president come visit with him around 6 and mentioned that we could give Zach a blessing while he was here. I told Eric I didn’t really want to wake him up, but if he did wake up with the president was here, we could definitely do that. If not, maybe we could ask another friend to come over a bit later.

Well Zach was still asleep when the president left, so we let him sleep. I had Eric tell his friend to come around 8 thinking Zach would be awake. Our friend came over a bit after 8:00 and I had to wake him up. I was okay doing so because I didn’t want to wake up at 3 in the morning after letting him go to bed so early. He also needed a dry diaper.

The men gave Zach a blessing and I then fed him. He was still a bit fussy, so we gave him another dose of medicine. (Playing the switching game here) He snuggled up with Eric for a bit and when Eric decided he needed to get to bed, he got Zach interested in something. Before too long Zach was up to his old tricks, exploring the places he loves to play and playing with the ‘toys’ he loves to play with: daddy’s tools, under the bed and door stoppers, to name a few. It was awesome. I really didn’t care that I was so tired, I was just so glad to see my baby happy and playing again.

I am super thankful for my blessings of today and the things that have occurred….

– To start with, as soon as we decided we needed to focus on getting the baby better, everything I felt was just gone. (It’s coming back again, but maybe just cause I’m so tired…)
– I’m thankful for a husband who cares as much as I do about being there for our sick kids. Even though either one of us could take the kid(s) alone, it’s nice to have moral support.
– We live in a day and age where medical personnel are readily available.
– We live in a day of great medicine that even babies are okay to have.
– We live in a great neighborhood and an awesome ward. When I told the secretary we wouldn’t make it, she went above her calling to say, “If you need anything, let me know.” Let me just mention that she is also the bishop’s wife and has 5 kids of her own she was trying to get ready on this Sabbath day.
– While I was super sad to miss the program today and the spirit it always brings, and because I especially love it when the program is just before or after my birthday (just before, in this case), it was really hard. But, we had the chance to hear the program twice last week and though the spirit wasn’t the same – I still got to hear what the program was. And most of the talks came from our class and these kids blow me away all the time.
– We were blessed that our friend took time out of his Sunday to come give our baby a blessing.
– We are blessed to have the Priesthood on the earth today.

Most people will attribute the baby’s actions tonight as coming from medicine. I won’t deny that the medicine played a part, but I’m not going to say that was the only thing. I know that the blessing he received also played a part. I’m so happy that Eric thought about a blessing, because it didn’t even cross my mind today.

I am just thankful to be who I am and live where I do and have the people around me that I do. I am truly blessed and I’m glad I get to go to bed having seen my baby almost back to his happy, playful self.