Life has been difficult for me as of late. Nothing has really happened, I’ve just been feeling really depressed and it’s taken it’s toll on many areas of my life.

One night I was really having a rough night and just broke down. Eric and I sat talking for probably a good 2 hours that night. Okay, so Eric was doing the talking and I was blubbering. And just for the sake of clearning the air – our conversation wasn’t an argument between the two of us. Eric was really just trying to help me feel better.

Well, the saddest part of me breaking down is that it was early enough in the evening that the kids were around. For the most part they just went about their business and they knew I was sad, but they also saw that Daddy was helping Mommy through things.

So when bedtime came, we all went to bed and I thought nothing really more about what had happened. Then I woke up to this:

The pantry door was filled with ‘Love Notes’ from Shaylyn (the apple was Ailey’s 1st project she did in Preschool). Shaylyn had spent a good portion of the night writing these little love notes for me.

She had notes that were serious, some that were silly, some that were humorous and some she just drew fun pictures on. In total she had 40 something notes. (I only know that cause one of her notes said, “I thought I’d stop at 28…but I decided to do all 46.”

It was hard to choose just a few favorites, but here they are:

(Not so much a love note, but it made me laugh anyway!)

I am beyond grateful for this girl and her words. It was refreshing to see that she cared so much about what I was going through, that she wanted to make it better. She didn’t really do much in the ways of the world, but she did more than enough for this struggling mommy.

I’d be remiss if I didn’t bring Tanis into this entry. While during the course of our conversation, Tanis wanted me to know that when he was feeling sad, he liked to look at Disney quotes. The next morning he sent me an email with this: 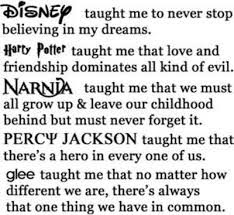 I so appreciated that as well. Probably most importantly the one about Harry Potter. I put way too much emphasis on what the world thinks about the way I’m doing things and not enough on what the most important people around me think.

If my kids feel like I’m doing a good job and they’re happy – that is really all that should matter.

Around this same time, I saw something on Facebook and other things that brought home the fact that my children are MY children and while other people may do things differently, it shouldn’t matter. I know my children and what they each need and they came to me for a reason!

I’m super blessed and thankful for these teenagers in my home and I pray they’ll always be sympathetic to those around them.