A few hours ago Eric asked me why I hadn’t posted the Halloween pictures yet and it made me laugh. It made me laugh because Eric was ornery last night when I was taking them and now he wants to see them. Silly man!

Now we all know I love Halloween. With the exception of the first couple years of Tanis’ life and the first year of Shaylyn’s life, we’ve never recycled costumes. Even though I’ve kept them all in a bucket…

My mom doesn’t like Halloween and she only kept a few costumes in a box that we could choose from. I wanted my kids to be able to be what they WANTED to be every year, so Eric’s been great to help me out with my wish by working it into the budget each year. I appreciate it more than he probably knows, especially since I know he doesn’t much care for Halloween.

Anyway this Halloween was pretty much the same as every year. Go to the Halloween Parade at school, come home, kids get home we eat and get ready to go get candy!

Here’s the rundown of the monsters in our town:

Tanis was a Ninja. He really wanted to be a knight or something, but we just weren’t finding anything of that sort. But when he ran across the Ninja he was sold! He made a cute little Ninja. Too bad he felt sick and didn’t go trick or treating. (I’m worried about this kids’ health…Probably unnecessarily, but still…) I also felt bad cause I told him this would be his last year to go trick or treating. I think I may rethink that next year and let him go again since he got sick this year. 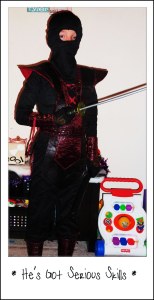 Shaylyn was Draculaura from Monster High. As soon as we saw that those costumes were available in our Costume Express catalogue, she thought of nothing else! We were happy we were able to find it and that we had enough money for her to get some boots to go along with the costume. The only problem we had with Shaylyn was the fact that Draculaura has bangs and Shaylyn didn’t. We made the decision to give Shaylyn’s bangs. So Sunday night, my wonderful friend Jobi ran over and gave her the PERFECT bangs. I just wish I would’ve got the pink hair spray to work and show up a bit better. 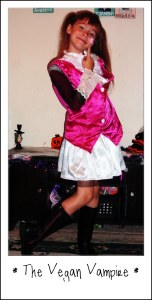 Lex was The Green Latern. He was another one that couldn’t find the costume he wanted. Of course what he wanted was not going to be found in a store anyway, we just didn’t have the heart to tell him that. We were happy when he found the Green Latern and he was excited about it. 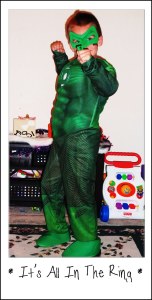 Nate was Brobee from Yo Gabba Gabba! I don’t really care for the show, but Nate really likes it. He had his heart set on being Sonic, but once again – Sonic couldn’t be found. We showed him some other costumes, but he wanted Brobee. I’ve never really liked the ‘face hats’ in costumes like this, but Nate looked cute anyway!

Ailey was Pebbles Flintstone. I refused to buy to goofy looking costumes they have for sale for Pebbles and so I had to put it together myself. You can read about that adventure here. I am so happy with how it turned out and she made the cutest little Pebbles. Sorry, Kaeloni! 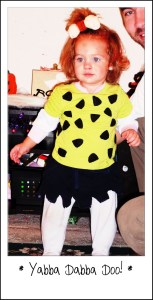 I should also mention that this was Ailey’s first Trick or Treat experience. Last year I was going to take her, but it was rainy and cold – so she got left with Daddy. This year she LOVED it. She kept saying, “Treats?” and was such a polite 1 year old telling everyone, “Thank Ew.” She I lasted about a street and half carrying her before I had to take her back home to Eric.

Even though I was trying to get a group picture that really didn’t turn out because of Nate and Lex, this moment was captured and I LOVE that about pictures now a days. You can crop out the bad and leave the good!

We had a nice Halloween. The night was beautiful and ‘warm’. After we finished Trick or Treating we all sat down and watched Nightmare Before Christmas before bed. I love spending holidays together as a family!

I hope you all had just as nice a Halloween!

3 thoughts on “In Our Town Of Halloween”