I almost forgot to post about this until I just read my sister’s blog. Thank goodness she is on top of things!

The weekend of Pioneer Day kept us pretty busy.

As stated earlier, Tanis’ birthday was on Thursday and that was a full day. I forgot to mention that when I went to leave my little sisters place I couldn’t find my keys. It was about 10:30 and I was stressing out. After trying to look in the windows of the car (since the car was locked) and calling Eric to tell him I needed help, I looked behind the diaper bag and lo and behold my keys! So we didn’t get home until 11:30.

Friday morning was a pretty uneventful morning. And I got a fairly late start to the day because Eric was home and I didn’t get a lot of sleep. I honestly can’t even remember how we filled up our Friday, but Friday night we headed yet again to the ball game.

It was yet another firework game and if there are fireworks Grandpa is sure to treat us. I usually have fun watching the game, but for whatever reason on this particular day it was more interesting to watch the people in front of us. They weren’t really loud or anything – they were just interesting to watch. 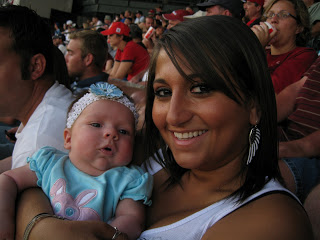 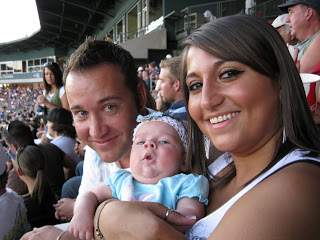 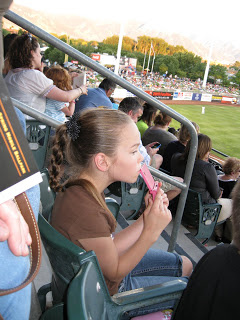 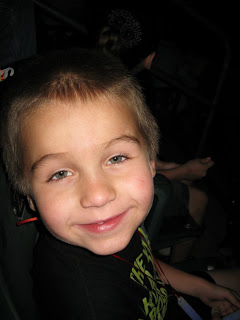 So Friday was another late night and we had a somewhat early day the next day. I still tried to sleep in on Saturday morning (I’m not stupid – if Eric’s awake and home, I’m going to take full advantage) and when I woke up I had to straighten the house and get everyone ready.

We were headed to my Mom’s for a bbq. However, because I didn’t get to the store on Friday we had to stop on our way to my Mom’s. I made Eric run in and grab everything and he did a great job – except for the fact he bought him a drink and not me!

We got to my mom’s and ate food right away. We like to eat. After the food was digested my brother in law had some entertainment for some of us. He brought tons of water balloons and we all had fun creaming each other. Okay, actually – the kids, my little bro, my bro in law and I were the only ones to play. My play time got cut short though because Nate decided he didn’t like what was going on.
My big sister took pics of the event and she needs to share them with me, but hasn’t yet!

After the water balloon fight we decided to head over to the school. We were going to play baseball. Well, I didn’t bring Ailey’s stroller so she had to share Makayla’s. What a sight that was. Yes I’ll share the pics! It was hard not to laugh at the poor little girls all crammed together. I think I failed and did laugh a bit! Ailey was not happy that she had to share a stroller and the fact that she was ready to eat didn’t help at all. And it was only when we were halfway to the school that I realized I had Ailey’s little strap on baby carrier thing in the car. Oh well. 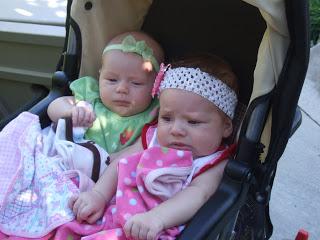 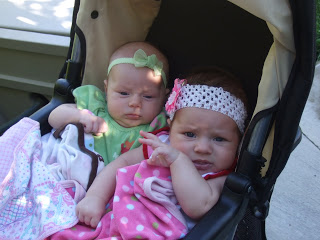 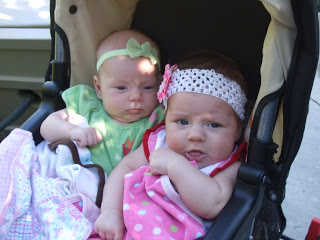 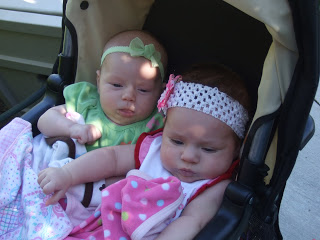 We got to the school and I fed Ailey. We then decided it was too freaking hot to play baseball so we headed back to my mom’s. I was kinda bummed about not playing ball as I was all set to go, but that’s the way the cookie crumbles.
When we got back to my mom’s it was time for watermelon and other games. My older sister got on the kick of how the ‘stupid’ people play these certain types of games and the ‘smart’ people play the other games. Okay, now because I was so tired from such long nights I was offended. Because the games she was including in the ‘stupid people’ catergory are the games I really enjoy. I also enjoy some games in the ‘smart people’ category and when they started playing one and asked if I wanted to play I said no.

So my little sister and mom were just shooting the breeze. Then my little sis and I decided we wanted something good to snack on, but we didn’t know what. So we headed over to Harmon’s and got a few snacks. Little sister saw someone get arrested – I missed it somehow… Darn it!

We got back to my mom’s and hung out a bit more until Eric was done with the ‘smart people’ game. We then loaded everything/everyone up and headed home. We were able to see some fireworks along the way and before we left my parents.

Sunday morning we got up and headed to church. I was released as a Scout Leader last Sunday, so this Sunday I started my new calling as a Primary teacher. I am teaching Shaylyn’s class with another lady and I am actually excited about it. On Sunday I didn’t have to teach, but I still got to go into the class and got to know the kids and listen to a great lesson on sharing!

After church we headed to Eric’s parents house for our usual Sunday dinner. Eric’s mom makes THE BEST homemade chicken soup, and as per Shaylyn’s request weeks before, that is what we had. It was an odd meal for summer, but it was still so yummy.

After dinner Eric went out back and played Bocce ball with his dad and older brother while Eric’s mom and I took and looked at pics. Here are a few she took: 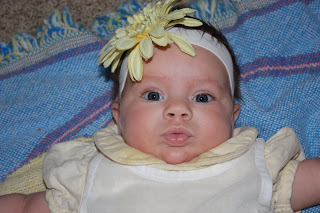 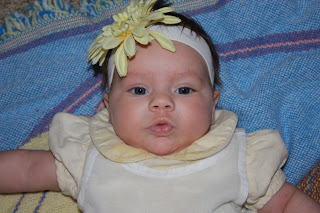 We went home fairly early and got a good nights sleep and we were ready to take on this week!