April 8, 2010April 20, 2017
So, this past weekend we took a semi-impromtu trip to Lava Hot Springs, Idaho. I say semi-impromtu as we only planned to go the week before.

As I explained last year, my family goes to Lava every other year, with my grandparents taking the other years. Well, this year my grandparents decided they weren’t going to go and asked my mom and dad to go instead.

Eric and I didn’t think we would go at first as we had decided we wanted to visit Eric’s grandparents in Nebraska this summer, instead. Well this was before Eric got his new job and all of that fun stuff. It was then decided that we probably wouldn’t be able to get to Nebraska since Eric wouldn’t have enough time off. (We may still try to pull the cat out of the hat – but that’s yet to be decided)

So, I asked Eric if he thought we could maybe do Lava, just for the weekend. Since he has Friday’s off, I figured we could leave on Friday and come home Sunday night. I also decided to keep it a secret from the kids. That was a hard task because at least one of our kids really enjoys Lava and I knew he’d be excited.

I wake up bright and early at 6:30. I had some last minute stuff to do and I wanted to be gone by about 9, so that we could be at the rental house around noon, like I told the owner. The kids were a bit confused about why I was up and ready when they were, but I let them think it was just an odd day.

We had breakfast and did all the usual morning routine stuff – cleaning the house, getting ready for school, etc. All the while, I let the kids think they were heading to school.

Around 8:00, I called the school to let them know that the kids wouldn’t be going to school that day. Shaylyn overheard and said, “This is the best day ever!” At this point the kids were under the assumption that I was letting them stay home so that we could dye eggs. HAHAHA…So not a reason to keep them home.

I then start packing up the last minute things and tell the kids to get their pillows and blankets. They then figure that we are going somewhere and keep asking, where, where, where? I tell them, “We are STAYING somewhere we’ve never STAYED before.” So that I didn’t have to lie to them.

We leave the house around 9:30 and Eric decides he wants to stop at Fanzz to use some gift cards he got at Christmas time. We stop at the Gateway around 10 and are finished by about 10:30. We are then on the road.

We finally get on the small stretch of road that leads to Lava and on this road there is a “wishing bridge.” Lex pipes in and says, “I know we’re going to Lava because of the wishing bridge.”

Our game was pretty much up, but we still kept quiet until we actually pulled into Lava. The kids were so excited and I was glad to finally be there.

Because my parents and little sisters family wouldn’t be arriving until later Friday night, I decided that we would dye eggs to pass some time. I had to pray that the little store in Lava would have vinegar as we didn’t have any to take with us. At first, I couldn’t find it but after a second look through, I found it.

So we head back to our rental house and start dying eggs. It didn’t take nearly as long as I thought it might. I guess the kids were just too excited to take their time and whatnot. 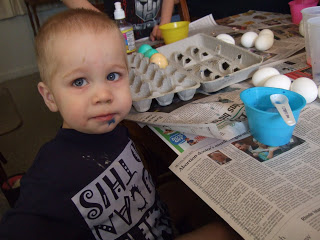 It’s a good thing dye is non toxic. Nate thought he should taste it, thus the look on his face. 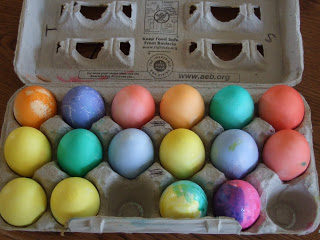 Tanis’ Eggs on the Left, Shaylyn’s on the Right

After I got the mess cleaned up from the dye, Eric and I decided to head into Pocatello to see if we could find a game store and to get some dinner. We checked out the mall first, and found nothing. We then try to find a store that Eric had found through his phone that was listed. We drove around and around and just couldn’t find the store.

We decided to just forget about it and get dinner and then we’d head back. So we stopped in at a Pizza Hut. While we were eating Eric decides to try and look again for a game store somewhere in Pocatello. Well, he finds one and after we are done eating we go in search of it. We find it, only it has closed down in the meantime.

We then decide to just go to KMart and see if they have any games we don’t have. We spend way too much time and money on some games and then head back to Lava. By this time Eric is exhausted and just wants to go back to the house and take it easy for the rest of the night. I, however wanted to go visit with my parents who had finally arrived in Lava. So, Eric took the kids and went back to the house and I went to visit with my parents for a bit. I stayed long enough to welcome my little sis and her family and to make plans to meet up around 11 the next morning.

We get up on Saturday morning and get everyone ready to meet up with the rest of my family. We get to my parents condo around 11:30 and it’s decided that we will stop at a Subway for lunch and discuss further plans.

The kids really wanted to go to this Outer Limits place that we went to last year with the black lit golf. The adults really had no ideas, so Outer Limits it was. The kids and a few of the adults mini golfed and Grandpa went shopping at a thrift shop next door.

What a difference a year makes: last year Lex didn’t want to go near this Dino.

After the mini golf, no one knew what to do. So because no one could make any type of decision – Eric and my brother in law took the kids back to Lava to play games while my parents, little sister, Lex and I went to Walmart to get lunch for Sunday.

I hate grocery shopping with anyone. I just want to get in and get out, but that doesn’t work so well when I am with my mom. It took an hour or so to get what we wanted and then we stood in the checkout line for who knows how long.

When we got back to Lava we decided to head to dinner at a restaurant there. The rest of the family then decided they were going to go to the big hot pools. Well, I didn’t know that I wanted to go. Eric was adamant that he wasn’t going to go (since it was SNOWING), and since I couldn’t get in all the way – I wasn’t sure I wanted to go either.

It ended up not making a difference anyway because I started feeling yucky anyway. So, we spent the night just relaxing. I did feel bad for the kids, however, cause I think a big part of what they love about Lava is going to the hot pools. But what else was I supposed to do? We called it a night around 10:00.

Happy Easter! The Easter Bunny found our kids even though we weren’t at home. They woke up and couldn’t wait to search for their baskets. Each of them found them quite quickly and kept trying to dig right in to their candy. Luckily I caught them all and made them eat breakfast first.

After breakfast it was time to pack up and clean up. It took me almost till 10:30 to get it all done, but then I had a half hour to relax.

Around 11, we said goodbye to the “Pink House” and headed to my parents condo to have some lunch and visit.

We were able to catch the last hour of conference and I was thankful that my little brother took the older kids outside to play so that we could actually hear. Nathaniel even took a nap, so that helped.

After conference was over we played a quick round of my new game and had lunch.

We decided we needed to leave around 3, so around 2 we had a wonderful dessert of Strawberry Shortcake. After dessert we headed out. We got home around 5:30 and watched New Moon to close out our night.

It was a whirlwind trip and I was upset that the weather was so bad, but all in all we still had a nice getaway and I think the kids were happy to have a short vacation.