August 29, 2008April 20, 2017
You’ll have to humor me for this post, but I promise there is a point to it.
In High School one of my very favorite classes was Genetics. This was only a half semester class and my Junior or Senior Year was the first time it was ever offered. (After the year I took the class they turned it into a full year class….)
Anyway, I’ve always loved finding out about how things work and how genetic traits are passed down from generation to generation.
There is something you can do to find out the possibilities of certain traits being passed down. It is some sort of table and I have no idea what it is called…If anyone else does, feel free to let me know.
Anyway, so this kind of table looks something like this:
So one parent is kind of shy (Eric) and the other parent (me) is very shy. Thus Eric has a big s (dominant gene) and a small s (recessive gene), while I on the other hand have two big S (dominant genes). The other figures in the box represent what each kid could possibly end up with. 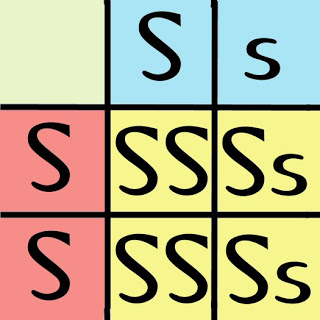 Now, assuming that the above is correct for all said purposes and that “shyness” is actually a hereditary trait, it goes to show that our kids with either be:

So, guess which kid is just like his mother???

Tanis had a scout activity on Wednesday where they were going to be driving somewhere. I didn’t go with him as I didn’t feel like taking 3 extra kids to where they were headed. So I went to drop him off and watched him as they got ready to go.

At first and for most of the time before they left he just hung back and wasn’t sure what to do. After the prayer was said and it was time to pack into the cars he followed a majority of the boys, but still was unsure what to do.

It turned out that 2 or 3 boys didn’t have a ride with the current vehicles going, so luckily another leader drove his compact car with those boys. I watched as Tanis slowly walked to this new vehicle and get in.

I am not sure how he reacted during the trip and at the place, but I have a sinking feeling it was about the same.

I just walked home half chuckling/half heavy hearted realizing my boy was just like me. I can think of a couple songs to go with this, but I’ll refrain.

My heart aches because I know the pain he will feel if he doesn’t outgrow this. HELLO – I’ve been on my soapbox about my pity parties – and I really don’t want the same life for him. He’s already sensitive and I worry that already he doesn’t feel as “important” as he should. He’s got a small speech impediment that his sister constantly corrects – however, if I hear her I tell her to stop.

I forgot where I was going with this as I had to stop for 20 minutes or so to clean up after the dog, so I guess I am done…

One thought on “A Lesson in Genetics”