August 6, 2008April 20, 2017
So perhaps you will remember in my last post that I mentioned how a lot was going on in my mind and in life???
Well, this past weekend was half the battle…I still have a bunch going on in my head, but as far as events in life, it pretty much ended this past weekend.
Friday found me crazily cleaning the house for a party on Sunday. I knew I wouldn’t have time on Saturday for much, so I tried my best to get it all cleaned. I get stressed out trying to clean because I feel like I have to do so much and it is just so not me. Don’t get me wrong – I enjoy a clean house and don’t really mind getting it that way, but I am not a perfectionist as most of my family is. So, I get stressed out that things are not going to be to everyone’s approval and yet I still try…
I figured I didn’t want to sweep, mop & vaccum the floors until Saturday because let’s face it – I have 3 mobile kids who don’t know what “keep this clean” means.
Saturday morning we were up at the break of dawn (okay, 6:30) but that is still EXTREMELY early for me. This was the day of Tanis’ baptism. His baptism was to start at 9:40, but Eric & Tanis had to be there about 20 minutes early and I figured I should practice the song I was singing with the pianist. (THANKS AGAIN, RHEANNA – YOU ARE A LIFE SAVER) So, in order to get 4 kids ready and get there on time and everything it meant I had to be up early.
We got to the church and Eric & Tanis did their thing and I practiced my song a few times before family started showing up. After family arrived and the bishop arrived, we began. My grandma said it was the nicest baptism she had ever been to. (Not sure if she was 100% honest or just trying to be nice) I did think it was nice. Both my mom and Eric’s mom gave talks and some of my siblings were willing to do other things for us. It was a great day and Eric even had a cousin come out to see it. 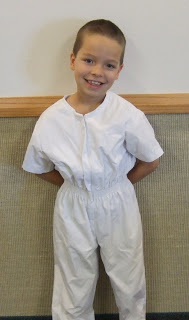 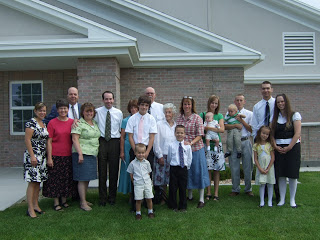 After the baptism we all headed to Chili’s for lunch. We had a great time and all enjoyed each other’s company and the food.

After lunch we headed home and I had a house to straighten and floors to clean. My little sister and hubby were going to be “house sitting” for someone in Saratoga Springs, so she just hung out while her hubby went home to get their stuff.

After I straightened the house and got the floors cleaned we headed to the store to get some things for the party on Sunday. Then it was back home to make cookies and play some games with Cody & Kaeloni. We had a blast. They left around 10:30 and I was only up until 11:30 finishinng up the cookies. (That is a good thing, by the way)

Sunday was the day we decided to bless Nathaniel. We were hoping to do everything in one fell swoop, but it is preferred that babies are blessed on Sundays. So, our families drove out twice. THANKS FOR THAT SACRIFICE. It was a nice meeting and Nathaniel was the only baby blessed that day which made it twice as nice. 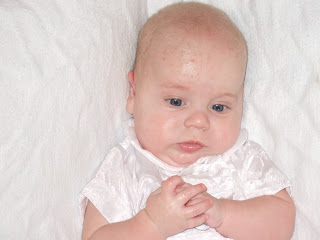 After Sacrament meeting we headed home to have Tanis’ birthday party…Only 2 weeks late. 😉 We started off the day with a small video I made of the past 8 years of Tanis’ life (which of course, I had to post for you all) featuring family members with Tanis. (Heads up…it is about 15 min. long)

After the video we got lunch put together…We kept it easy and did deli type sandwiches. This went over really well and everyone seemed to enjoy it. After lunch we hung out and took care of presents – of course this was Tanis’ favorite part of the day. After presents it was cake time. This is another thing Tanis really enjoys.

After that everyone decided to head home and do whatever with the rest of their Sunday. My little brother stayed with us as Eric was heading out of town on business on Monday. So, Eric, my little brother and I played games for awhile. Eric then got a text from his older brother saying that he was going to be coming over.

Greg came with one of his friends and the kids had lots of fun wrestling and messing around with uncle Greg. When the kids finally got bored/tired of it all they headed back downstairs to hang with uncle Logan. Then Eric and I visited with Greg and his friend. We had lots of laughs and enjoyed the night. We went to bed late, but it was worth it.

Monday rolled around and at 5:30 the alarm went off. Eric got up, got ready and left us for 3 days!!! His work sent him to D.C. to do some on site stuff. I have so many mixed feelings when Eric has business trips. He RARELY has to go on business trips so it is always hard for me when he goes. I miss him like crazy and the kids miss him too. It’s hard to get used to him not being around when I am so used to just his presence. On the other hand, I am thankful he has his job and that he got some time to be a tourist. I am sure it was a nice little break for him. Plus, it isn’t too bad because we keep in contact through messenger – I don’t know how I would’ve survived living in any other era… Oh well, he is back tomorrow afternoon and I am excited.

Monday I took some time for myself (THANKS, KAMI) and got my hair done. I got a nice good trim (okay, so it feels like a lot got cut off, but that’s probably just me) and some highlights. I love it! And it gave me a 2 hour break from the kids – my sister was nice enough to watch all 4 kids.

Part of why my brain was so crazy was because I have been pondering a lot on the last 8 years. I still can’t believe my oldest is 8, though I handled it a lot better than I thought I would. It’s been like a whirlwind.

Tanis is such a sweet kid. He is the one who will tell me “thank-you” for the most mundane and “expected” things. If I wash his favorite pj’s or clothes I get a thank-you, if I buy him a favorite cereal or something I get a thank-you, cooking a favorite meal will elicite a “thank-you.” This boy just lightens up my days and can always tell when I need a hug.

He is my sensitive child as well. We have learned that we have to be careful what we say to him and how we tease him as things can get misconstrued.

He loves to read and is always asking to go to the library. (I kept telling him no for a long time as we had late books that were supposed to be returned that week I was so sick and I was avoiding the payment…It came to $16 something, just so you know) He loves poetry books and Dr. Seuss.

I just love this boy and am so thankful to have him and that he was born perfectly fine even though he was a month early….If you would like to read the birth story click here. (THANKS CATEY FOR THE IDEA)

Okay, I guess I rambled enough for one post. My mind is still reeling with some other things though, so we’ll see what happens when I post next…